Pressing the power button starts up the robot. The pcs will automatically boot if the robot is powered up. As soon as all pcs are bootet autostart will start the bringup layer on the robot.

Holding the power button for 2 seconds triggers all pcs to shutdown. As soon as all pcs are shutdown, the robot will turn off.

Holding the power button for more than 5 seconds will hardly cut power to the robot. Note: This way might cause serious damage to the robot hardware (e.g. corrupted file systems).

The power management of the Care-O-bot allow the user the possibility of reboot the hardware of the robot from an external terminal, without the need of press the power button to power off and power on.

This command can only be executed on base PC, see the section Login, using the following line:

The command will first shutdown the Pcs (this can take some minutes) and then turn off the hardware components, 3 seconds later the robot will power on again automatically.

You can login to the robot pcs using ssh.

There are two ways of starting the bringup layer on the robot. We recommend to use the autostart function.

If autostart is activated, you will just have to wait for all pcs to boot after turning on the robot. You will see the torso lights pulsing as soon as the autostart is complete. This process may take up to 5min.

You can manually check if ROS is already running with the rosnode command.

If this delivers a list of nodes then ROS is running. If you get ERROR: Unable to communicate with master!“ then no roscore is running.

You can manually stop autostart with the cob-stop command.

If no autostart is activated or you stopped the robot manually you can start the bringup layer again.

Note: You should not start the bringup layer multiple times (e.g. autostart and manual start in parallel). Please check with rosnode list that bringup is not running before starting manually.

There is also a version which starts only the base which can be used if the upper robot is not mounted.

We've implemented the ROS diagnostics concept into the bringup layer. All information is aggregated and shown in the diagnostics gui, called the dashboard. Furthermore the command gui allows you to trigger some basic commands on the robot.

The command will launch both interfaces. 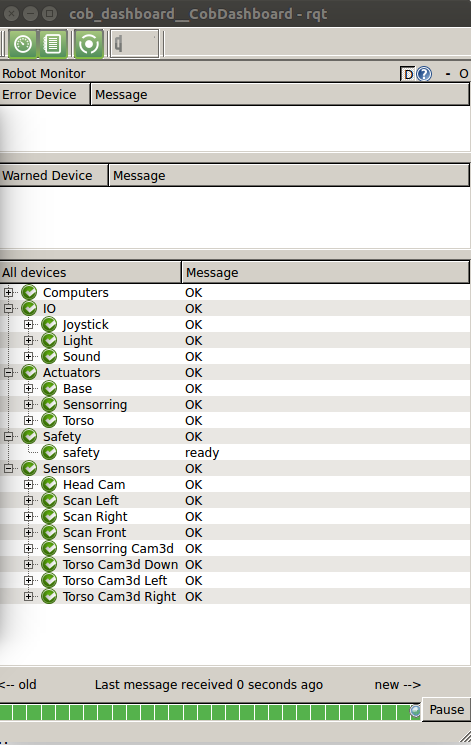 If you press on the top left icon you can open the detailed diagnostics screen which should look like the screenshot below. If all components record status "OK", the robot is ready to be used. If not, please double click on the component to get more information. 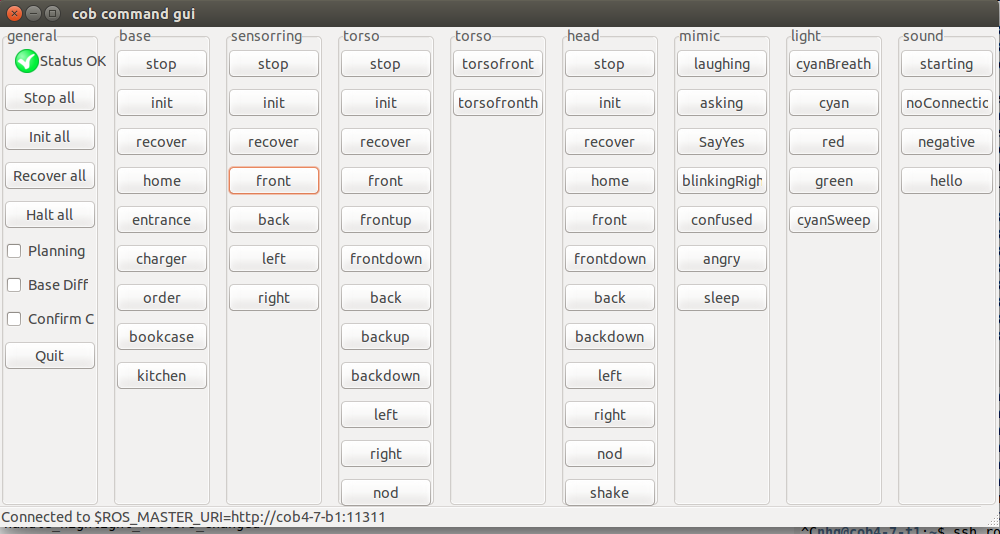 Using the command gui (see screenshot below) you can trigger basic commands on the robot like initializing actuators after startup or recovering actuators after an emergency stop. There are also buttons for moving the actuators to pre-defined positions.

Note: Be aware that not all actuator positions and their transitions are collision free!

It is possible to operate the basic functions of the robot using a remote control.

The following screen shot shows the mapping of joystick axes and buttons.

The following functions can be started directly with the remote controll

The enable-button (B23) has to be pressed during all joystick inputs, like linear or rotary commands fot the mobile base.

By pressing the safety-button (B25) the protective fields are reduced to the minimal possible size. This should only be done when needed, e.g. to manually manouver the robot in very narrow space, or to drive manually into the transportation box (not recommended).

There is a pre-configured RVIZ configuration available for Care-O-bot 4. We recommend to run rviz on a local pc (not on the robot pcs).